Simon opened his first showroom, Pittville Bathrooms, in Cheltenham in 2007, followed by a separate kitchen showroom in 2010. In 2016 he expanded the business further to offer a premium range of design solutions for bedrooms, living spaces and home offices, all supported by a holistic interior design service.  His most recent addition to the business sees an expansion from indoors to outside, with the launch of a luxury spas showroom in 2017.
Simon has a BSc Hons in Landscape Architecture and is a trained bathroom, bedroom and living space designer. In his life before Pittville, Simon worked as a carpenter, both domestically and in the television and music industries as a set builder.
In 2016 Simon successfully graduated as a retained firefighter and now splits his time between Pittville and the Gloucestershire Fire and Rescue Service.
On the rare occasions he isn’t working, Simon enjoys training for ironman triathlons and just about anything that involves running, cycling or swimming! He completed the London Marathon in 2014 & 2016 in aid of the charity Children in Crisis. Simon also enjoys spending time with his family and cooking up delicious food in his kitchen.
Simon in three words: confident, undaunted, smart.

‘It is a privilege to be welcomed into someone’s home or property to create a space that they will get to enjoy for many years. We are very lucky to work in some fabulous places and meet some wonderful people.’

Simon’s top tips for planning a new kitchen or bathroom:

I always advise clients to think carefully about their budget before they set out, as it needs to include not only the products, but also the installation, building work and finishing touches.

Our bathroom showroom opened in 2007, followed by a separate kitchen showroom in 2010. In 2016 we expanded further to offer a premium range of design solutions for bedrooms, living spaces and home offices, all supported by a holistic interior design service.  2017 sees our expansion from indoors to outside, with the launch of our luxury outdoor spas showroom.

Monday to Friday - 9am to 5pm Saturday - 10am to 5pm *We also offer after hours appointments on Thursday evenings. Get in touch to book your appointment. 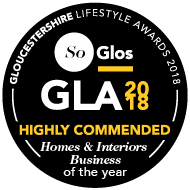 HOW TO FIND OUR SHOWROOMS

Our twin showrooms face each other on Prestbury Road, 200 metres north west of Pittville Gates on the B4632 leading towards Prestbury and Winchcombe.  Here you can find all you need to know about our Bathrooms, Kitchens, Bedrooms and Living Spaces services.

On street parking is available, some free, some paid for.  Subject to available spaces, you are also welcome to park at the rear of the Bathroom showroom – for Sat Nav use GL52 2BU Malden Road.